Campsite fires can spread quickly. A smoke alarm will give you early warning of a fire. If you have a fire extinguisher and fire blanket, you will increase your chances of putting out a fire early, even if it started in someone else’s tent.

Leave a gap of at least three metres

On campsites, there should be a gap of at least three metres between caravans, camper vans and tents. Vehicles in which no one is sleeping can be parked in the gap.

A three metre gap is not enough to prevent a fire from spreading. The purpose of the gap is to stop the fire from spreading too quickly, giving people near the fire a chance to escape and, if possible, help to put it out. If there are strong winds or the type of vegetation that would make it easier for a fire to spread, you should leave a bigger gap.

The provisions of the Planning and Building Act may apply to terraces, wooden caravan extensions and other more permanent structures. These will be described in the campsite rules.

Every second counts in a fire. A smoke alarm increases your chances of getting out in time. Smoke alarms should be permanently fitted to caravans and camper vans. Remember to replace the battery and check that the smoke alarm is working before you leave home. You can use a travel smoke alarm in tents. It’s a good idea to keep a knife handy in a tent, so that you can quickly cut your way out if a fire starts.

Every caravan and camper van must be fitted with fire extinguishing equipment. Make sure the devices are easily accessible and regularly maintained, so they're always ready to use in the event of a fire. A fire blanket is also a great device that doesn’t take up much space, and can put out small fires very effectively.

Be careful with barbecues

Many people put their barbecue too close to their caravan, camper van or tent. Remember that barbecues get extremely hot, and can easily set fire to walls, tent fabric and groundsheets.

Keep barbecues and other appliances outdoors

Never have open fires or glowing charcoal inside a tent or awning. Tent fabric catches fire quickly, and can give off many toxic gases. Barbecues, cooking appliances and other hot appliances should be placed at least one metre away from the wall of a tent – outside the tent. If you light a barbecue or gas appliance inside a tent, you not only risk setting fire to the tent, but also suffocating due to a build-up of smoke and other gases in the tent.

Faulty electrics and misused electrical appliances are the cause of many fires every year. Electrical systems and equipment in caravans and camper vans must be installed in accordance with regulations. It is up to you to use the system and equipment responsibly. Before your holiday, it’s a good idea to get a qualified professional to inspect the electrical appliances on board and perform any maintenance necessary. You should also read the campsite rules on how to connect to the power supply.

What to do if clothing catches fire 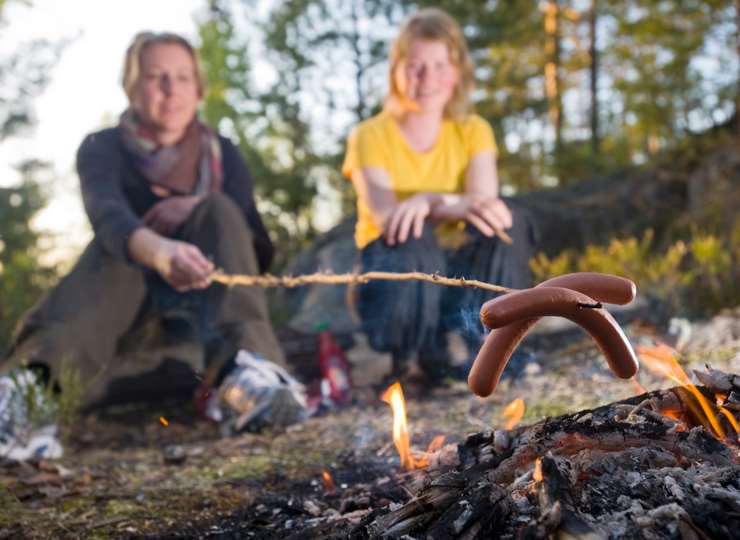 What you should know before you light a bonfire